This second lesson is a little less about sound and a lot more about constructive attitudes on the set of a film.

A long day on set can really test everyone’s patience and thus it is very important to take time to let off some steam and have fun.

No matter how tight your schedule is, there is guaranteed to be at least a little down time.  For example, shown in the video below, we had a short break while waiting for our RED camera memory card to be backed up (and cleared) in order to continue filming.  Obviously we didn’t break into song and dance every time we had to wait for storage media (which happened a few times), there are often odd jobs/equipment checks/etc to be done, but every once in a while when the pressure/tension became a little too much we all found ways to open the valve and let some steam out.

Other ways to let off steam:

Long story short, long days on set are going to get tough but if you take some time out of your day to have a little fun, especially useful as bonding exercises with crew mates, and to blow off a little steam. 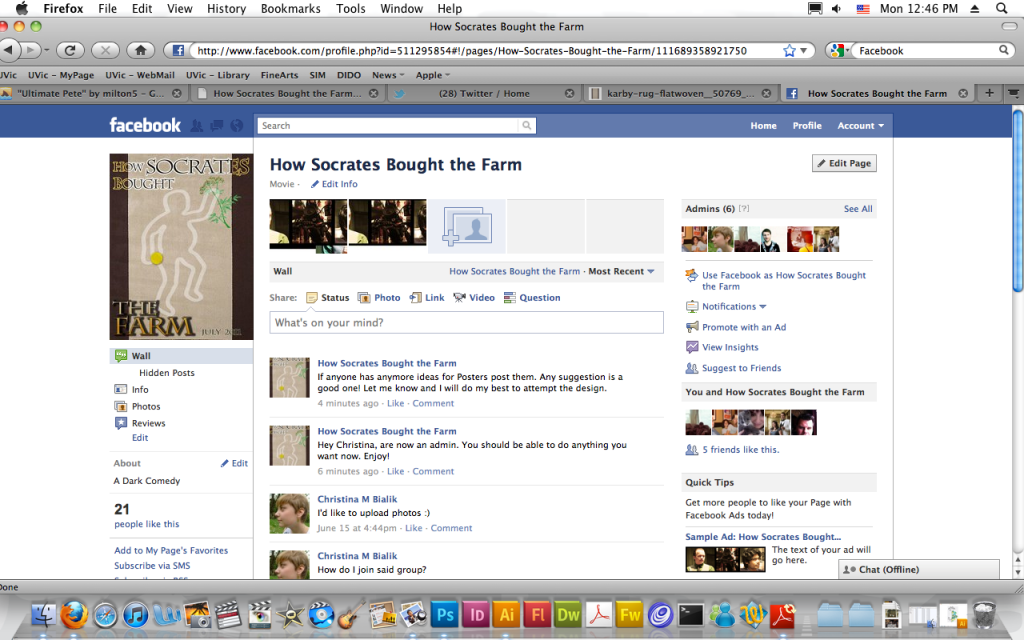 Just in case anyone doesn’t know, we have a Facebook page!!!!

The Very First Socrates Poster (Not the Official one)

This is more of a teaser poster. The actual poster should appear on here in the next couple of days! Keep checking the Twitter-feed and the Facebook pages for updates!

Shooting ended a while ago, but I’m still mulling over my experiences working on an actual film crew. Being in control of what the set looked like really went beyond what I expected. It helped develop the character’s personality into something more concrete. I never considered how connected a personal space (such as a room) is to how people might view you. Tyson did some awesome drawings of what he imagined Rohan’s room would look like. I brought in some philosophy books (with a huge thank you to Russell’s Books) and various old cameras and rodent bones. The camera’s weren’t originally in the script, but Tyson and I agreed Rohan was a visual person, and liked documenting things in his life. It brought the room together quite nicely. It was cool bringing another layer to the character.

I also was amazed how much you could alter the set during shooting. We moved the whole set back a few feet when the camera was in front of the desk, but it still looked realistic. When we changed angles, Tyson and I simply pushed everything to the wall where the camera was before. Looking over the footage, you would have no idea that we had to change the whole set. It was a neat trick, and I’ve been looking for it in movies ever since.

Now all that needs to be completed is editing. After using the slate as part of 2nd AC during the kitchen scenes, I’ll be doing the job of Sound Editor once the final cut is complete. During last class we saw the rough cut of the film and pitched in what we liked about it and what needed to be improved. There were some pacing and structure issues that were talked about and some good ideas bouncing around the classroom on how to improve some scenes for the end cut. It will be interesting to hear what the soundtrack/score will sound like, as well as sound effects. Some early EPK footage was also screened and looked promising as well. The interview with Dan was shot professionally and all in all captured the good time felling of our class and of the production. The make-up video by Alexa was pretty funny, ending was…creepy, but creative.

Also, the Socrates film shoot was featured in the Times Colonist this past week. Many thanks to Michael D. Reid for the really positive article. It was awesome to see our hard work get published, and it was great to see my painting displayed in their photo. Set designing along side Nicole was lots of fun to do and not as strenuous as I thought it would be. Looks like things should go smoothly for the remainder of class. 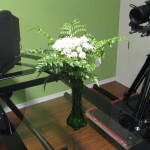 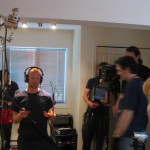 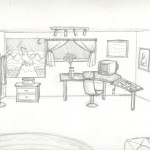 One of the most important concepts for recording sound is the idea of ‘Critical Distance’.

“the distance at which the sound pressure level of the direct and the reverberant sound fields are equal when dealing with a directional source.”

The amplitude of sound, over a distance, is governed by the ‘Inverse Square Law‘ which states that the decrease in power of sound is inversely proportional to the square of the distance.

Relative Sound Pressure Level (aka, volume) is measured in decibels (dB), a logarithmic ratio which simplifies much of the calculations required for the measurement of the intensity of sound. Without explaining the mathematics behind this concept it is easy to just remember that a drop in 10dB means the volume is cut in half (also, 10dB+ = 2x volume).

Back to the ‘Inverse Square Law’. What this amounts to is that with every doubling of distance there is a drop in 6dB (not quite half). This becomes very noticeable when one considers a singer next to a microphone where a movement of a few cm can nearly double (or half) the volume.

But once you hit the ‘Critical Distance’ threshold, the volume of the sound source will no longer drop and a constant dB level with be maintained.

This threshold will be different for every room and microphone.

Thus, when recording audio, it is important to find the ‘Critical Distance’ and decide on a distance which works well.

Here is a video which demonstrates this idea:

But maybe thats just what I think. In today’s meeting aka. class, we got to see a rough edit of the film! I was shocked as to how good it looked for just being rough. I never really understood what it took to edit a movie and now I finally know. The amount of ways that you can edit each shot is absurd. Sound and the camera are completely separate, meaning that you can place the sounds that took place in one sense and put them over another. This to me makes editing so complicated because everything can be edited like 400 ways. There are too many choices.

I also never realized how much control an editor really does have over the direction of the movie. If a movie has a shitty editor then most likely the movie wont be too great. Lachlan and Wil are the editors for “How Socrates Bought the Farm,” and I must say they are doing an excellent job.

In talking to Lachlan today I was shocked to hear that in less than 5 days he has put in more than 30 hours just getting it to the rough version! I can’t even imagine how long and how many people it would take to edit a feature film.

As for the music for the film, he says he should have a CD full of tunes ready for mondays meeting!

Final day of production was a doozy! It’s now a week later, and some of us are still recovering!
I got to set earlier than the day before with the goal of getting all the french toast ready in advance of anyone showing up so that I might be able to sit down and enjoy a “family” style breakfast with cast and crew. NAIVE! 🙂 I was making french toast for 2 hours straight and ended up eating a banana! My generous friend Charlotte connected me with 6 free loaves of Cobs bread and so I was duty bound to use it all. So even though people were as full as full can be, I had an extra three loaves to turn into french toast fingers for snacking on throughout the day. After that was taken care of I zipped home to grab the chili and rice. But, my food obstacles were only beginning because when I returned to set, the kitchen was crammed packed with lighting, the video monitor, continuity and our dear old director, Jeremy. So Christina and I took off to heat up lunch at her place before returning to feed everyone. Afterward I was really hoping to get some Gripping in but the dishes were calling. One of the rules we were told was to leave the location better than how we found it. And so the mess we’d accumulated in two days of shooting was a pretty pressing problem.
It was pretty funny cleaning in between takes. So even though I didn’t get to play with any lights and it took a few hours, by the end of it Connor’s kitchen was pretty impressively clean even if I do say so myself.
So with that, my job as caterer/chef/dishwasher came to an end. 🙂
And now I’m one of two editors in charge of sorting through and piecing together the footage we shot.
Next blog about that whole new process! 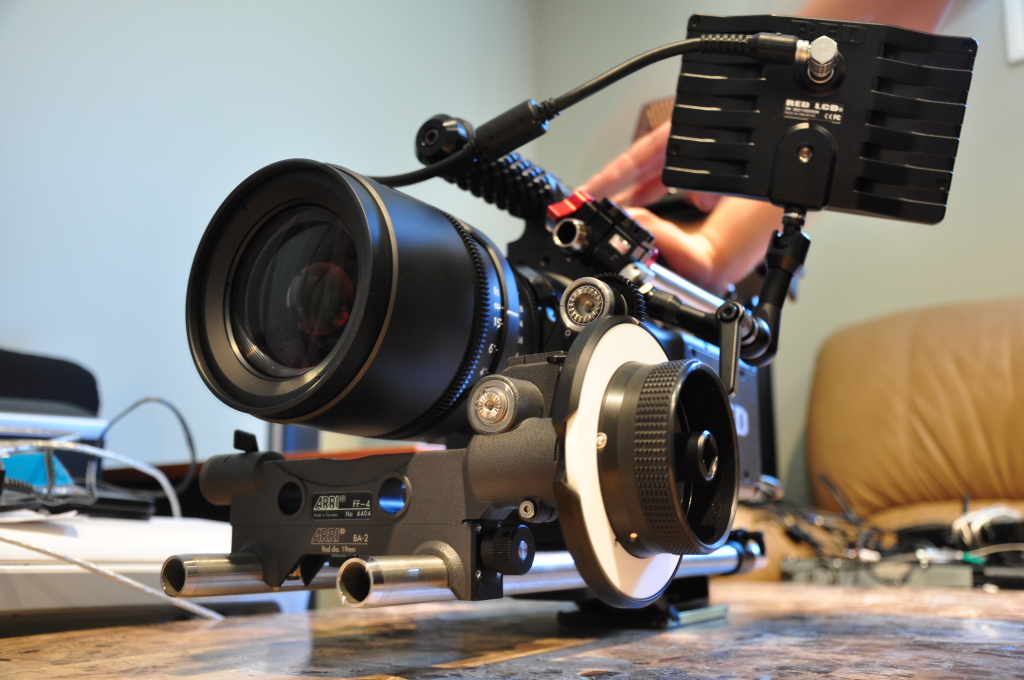 How Socrates Bought the Farm was shot with a RED camera. This was the same camera that was used to shoot such films as: The Social Network, The Amazing Spider-man, Pirates of the Caribbean: On Stranger Tides, and District 9.

Just got home from meeting up with a local composer in Victoria. Was a pretty interesting experience seeing how easily music can be made on a computer. I would just throw out some ideas of what type of music might fit with the film and he would just crank out songs; he’s like a human jukebox. We came up with some pretty interesting tags from all sort of genres. Some country, some blues and even some strings. It’s pretty amazing what you can do with a computer. It has inspired me to go home and finally click that application that reads “Garage band” and try it out.

He said the music tags should be finished sometime later this week, so I should be revienceing them on a CD sometime soon! I’m really excited to see what the class thinks of them and how they fit with the film. The selection of what type of music we use could completely change the feeling of the film so we’ve got to get it right! Its a hard decision whether or not to play into the comedic side of the film or the dark side of the film or even maybe play into both sides. We’re just going to have to wait and see what fits best!

I’ll let you know how it goes!