Here are some concept art pieces for the posters.

Originally I thought that the movie poster should have a feel that was less than serious. I designed both of these pieces before it was evident that the film would be much more somber and dark. These designs were not only meant to be colored in a more Colore (heavy brushstrokes meant for adding exciting texture rather that solid lines) style than a Disegno one (a very precise style, mostly associated with works that feature architecture, that relies heavily on intricate detail and straight, definite lines), but they were also meant to have bright colors with pinks and blues; mostly for the one with the mouse skeleton in the costume. 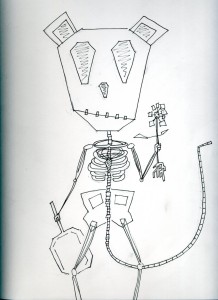 In case it is hard to decipher, this is a mouse skeleton holding a frying pan and a piece of Water Hemlock. The title would appear along the bottom. 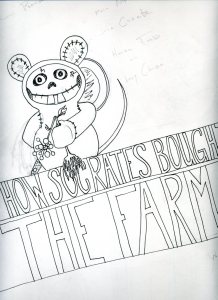 Here is the Piece that was originally going to be colored with bright colors. It is a mouse skeleton that is wearing a mouse suit and holding a frying pan and a piece of Hemlock.