“The Invisible Man” and Integrating Editing, Music and Cinematography into 360-degree Filmmaking

By Kate McCallum, University of Victoria

One of the largest challenges with 360-degree filmmaking is figuring out how to successfully tell a story with the knowledge of 2d “flattie” filmmaking that can become limited within this new medium. Can filmmakers take tools such as cinematography, editing, animation, sound, and lighting and treat them the same in VR films as they would a flattie, or must they develop a new way of expressing the story within this new medium? The obvious is the latter, however the amount of integration is still to be discussed. My experience in viewing 360 films is limited and I’m definitely no expert in the topic, however the few films I have seen shy away from more stylistic elements of a flattie film. I’ve observed that these films tend to work with action in the space around the camera to move the story forward, rather than use flattie tools. In the film “The Invisible Man” by Hugo Keijzer, Keijzer breaks this barrier by integrating a unique tone, editing, cinematography, and music. 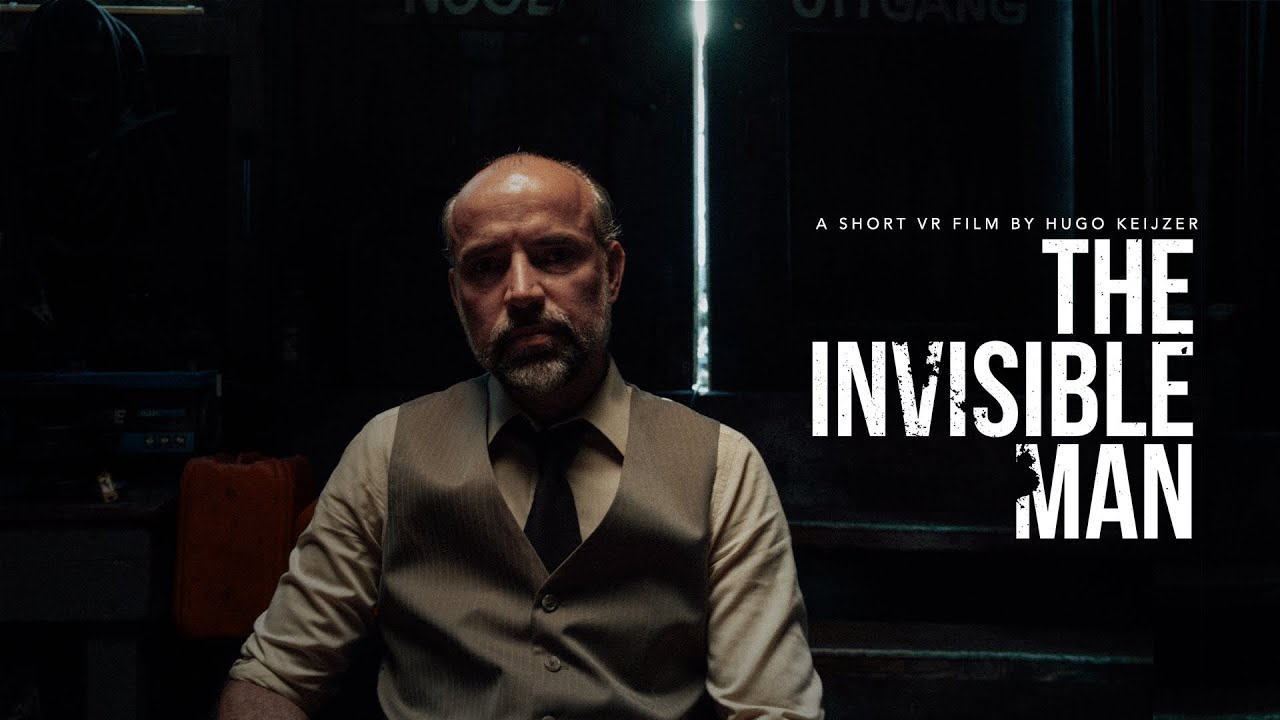 “The Invisible Man,” focuses on two low-level drug traffickers that get mixed up with a man named Frank that they owe money to. Frank forces the two men into playing Russian roulette as a twisted way of getting even with them. “The invisible man” is in fact the viewer sitting across from the characters at the table. This is revealed at the end of the film when Frank begins to confront the camera and fires the gun as the screen cuts to black. This integration of the viewer in the film is more successful to me than other ways to integrate the viewer, because it allows the viewer to choose where to freely look in the space without having to deal with camera movements decided by a character. In some 360 films the camera is the perspective of a character and the viewer must follow the movements of that character through a camera that is usually strapped to someone’s head. Check out the film “Night Light,” and “Happy Birthday,” to see the camera techniques I’m talking about.

This is problematic as a first person view from the camera may discourage the viewer from looking around them and using 360-degree films to their best advantage. The viewer may be more focused on watching the action from the characters viewpoint instead of exploring the space and film from their own viewpoint.

“The Invisible Man,” has a campy style and is an ode to older gangster films through it’s characters, and language. Music plays an important role in the film, changing when the film shifts from its goofy, campy tone to a more serious and tense mood whenever Frank threatens and attacks the other characters. Where this could be shown with cuts and tight close up frames in a flattie, Keijzer relies on music to make this shift as cuts to closer frames would prove useless in 360-degree films in that it provides no new perspective if the entire scene and setting is shown in 360-degree. I feel that the music in this film allows the viewers to immerse themselves in this film even further, as it reminds the viewer to engage in the action between the characters rather than get lost in exploring the setting.

Keijzer also uses multiple zooms within the film. He focuses on small actions that otherwise might not have been noticed by the viewer. This brings attention to the one bullet Frank loads into the gun,

when Frank threatens the other characters, and whenever a gun is held to the head of one of the characters, thus adding even more tension to the situation. You can see below in a panoramic shot of the set that one characters head is blown up.

The zoom also guides the viewer to pay attention to the action so they don’t miss any crucial moments. Along with adding the zooms in post, Keijzer also speeds forward through unnecessary action that would otherwise slow down and possibly bore the viewer. Actions like emptying pockets, loading/ grabbing the gun, etc., are sped up so the viewer doesn’t have to pay attention to such mundane action that adds nothing to the tone or story. In flattie filmmaking these actions could be made more interesting through cuts or what is shown in the frame. Within this film Keijzer uses this editing to add tension to the scene without boring the viewer.

“The Invisible Man,” is a unique 360-degree experience that integrates different flattie filmmaking tools efficiently and successfully, enhancing the film overall. The only downfall of the film is the limited movement of the characters. Only 180 degrees of the set space is used as seen below, the top image is a screen grab from the best angle for the action, the picture below it is a panorama picture of the entire set. 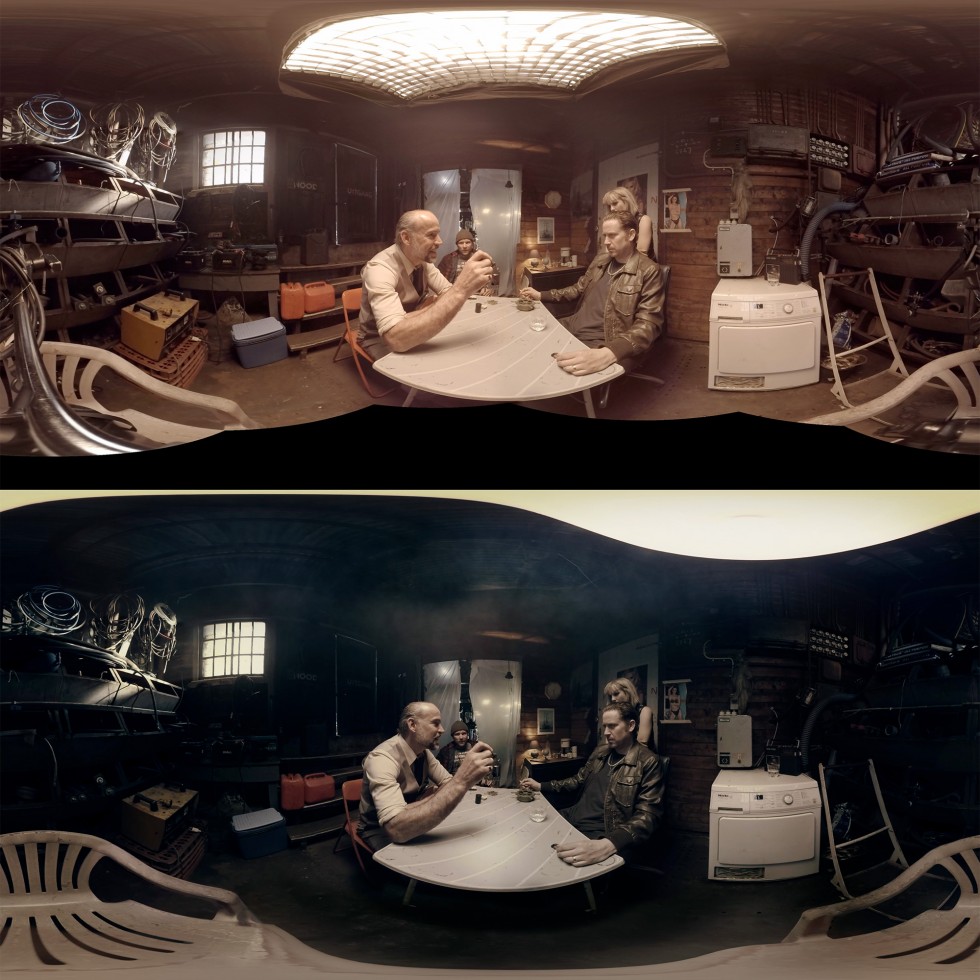 The other half sits in darker lighting and only once does a character get close to this area in the film. At the end of the film there is a fight scene between two characters that takes place out of the viewer’s site beyond the table sitting in the middle of the room. This not only leaves the viewer out of this action, but staging the fight scene to move around the entirety of the space would have been exciting to see and would have prompted the viewer to move with the characters.  While this film may not be the best example of movement within 360-degree films, it definitely serves as a starting point for integrating different filmmaking tools into the new medium successfully.

Check out “The Invisible Man” and let me know what you think.  https://www.youtube.com/watch?v=I_FUpUi2LBk